we are working on some projects with some villages in another province. we invited two chiefs to our workshop. they told me they took a 28 hour ferry down the congo river and are now in the capital. they attend all our pre-workshop meetings with a translator, always dressed in their official color: red. no one else in the village is allowed to wear red. 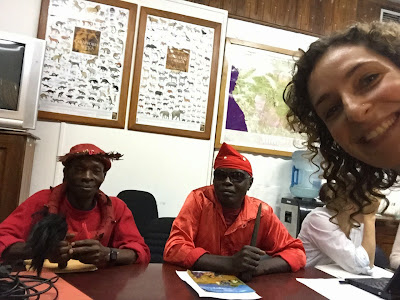 one has a christmas sweatshirt and an inner tube covered in red fabric around his neck with real lion teeth on it: passed down from all the previous chiefs. he holds a wand with horse hair to wave away spirits and his hat has red feathers. the other one has a satin red shirt, a wooden baton and women's fashion glasses with rhinestones and a hat with shells sewn on. amazing.
at one point they told a great long story, how if you want to marry a woman, you have to court her, and show her you are serious about your love. this is how things work in their village. and so if WWF wants to work with their village then we have to prove our love, and prove we are serious.
how do we do that?
we'd like two motorbikes please. we were promised motorbikes, but we have none, and we are tired of walking everywhere.
is that all your love costs? motorbikes are cheap.
Posted by lefty at 6:27 AM

I found it a bit odd when I called Taxi Papi about our dinner plans his wife Mimie kept answering his phone. And why isn't she at work? And he didn't offer to come pick me up? It's ok, I found another guy with a really nice Japanese car, Vincent. He's a tough negotiator and drives a Toyota with the steering wheel on the right and a gps screen all in Japanese, with cartoon anime sky scrapers on it, like a video game set in Tokyo. This car is literally straight from Japan. He had a lot of interesting stories to tell about his days of driving ministers around and I even recommended him for a job at WWF. He said I was a blessing from God and gave me a pamphlet of gospel.
So I arrive at Papi's building, the trippy tall one with the Samsung sign on top, with amputees and beggars everywhere and Mimie is waiting at the entrance. They have a maze like path to their apartment across balconies and ledges and we walk through a little work zone where a guy is welding one of those cages you put air conditoners in. Sparks flying everywhere, and instead of welder goggles he has sweet aviator Ray-bans. Probably fake ones. I'm trying to take a picture when Mimi stops to tell me the bad news. Papi had a terrible accident, run over by a car on the huge boulevard. They didn't want to tell me on the phone.
We enter and there is Papi, smiling as ever with a huge head wound, foot cast, messy scars, it's absolutely awful. I dress their baby, Melchi in the Deutschland national team soccer jersey I brought and they tell me how it happened..middle of the busy morning, hit and run in the crosswalk, driver took off and they found the car later but can't locate the owner.
Papi looks tired and sore and I remark that at least his face is intact, which is most important, right? The cast on his ankle looks like a child put it on and I can only imagine what level of care the Congolese hospitals provide.
We eat a quiet meal while the baby sleeps in his chair on the floor. They keep trying to make me eat but I can't, because I feel sick and because the dish is full of teeny tiny fish you eat whole and are oh so spicy!
Later on the extended family arrives and the apartment is full of people and kids trying to lighten the mood. The kids are arguing over the baby's uniform. World Champions I say, Germany! and they respond with Barcelona? Ronaldo? And I'm like, no, not Champions League, World Cup! They look at my blankly. ahhh, I guess DRC never qualifies so they don't care...We are all sitting in the living room in front of the TV. The brother in law comes in full camouflage military gear, and stores his red beret in the flagged flap on his shoulder. I quickly hand him the remote and salute him to change the channel, my colonel, but he's not the laughing type.
We eat some pineapple and relax a bit but I can see Papi is clearly in pain so I decide to call it a night. Papi says the brother in law will bring me home, who looks at me with his beady red eyes and asks in a deep rumbling voice: "vous n'êtes pas véhiculé?" I am unvehicled, sir.
My apartment is basically two rights at the intersection where the patachoux bakery is but there is a lengthy discussion of directions in Lingala with hand movements and "nonono! Pas la! Plus loin!" And then more Lingala, until finally he angles his beret on his head: time to go.
We exit downstairs where all the beggars scatter like ants, military guy apologizes for the state of his vehicle: an 80s Mercedes Sedan that is so busted up it looks wrinkled. Color: dull army green.
The door doesn't even close I have to hold it towards me with the handle which itself is barely affixed. The windshield is cracked in so many places it looks like it was pelted with baseballs. You hear all the parts of the undercarriage rattling and wanting to fall off, and I am dreading the turn into my dirt mess of a street which has potholes so deep there are small forests growing in some of them.
We cross all the intersections with non-working lights where you see the pedestrians racing terrified across the boulevard. At least at night I understand accidents can happen but during the day? ...
We turn well before the patachoux and meander through all these streets I have never seen, breezing through checkpoints and even past my old villa near the president's house. The driver is not talking, he is just turning left, and right, and left, and right and I am thinking he probably wants to disorient me before he pistol whips me. Suddenly we are in front of my house. But...how did you do that? My street is a dead end! He shrugs, smiles and reaches over to open the door. I get a beret salute and off he goes.
The adorable, adaptable, ever surprising and completely undefinable Congolese.
Posted by lefty at 6:21 AM 2 comments: