some humans are just savages

i have found out here that for every 3 good days in DRC, you get one bad one.

the last bad one was saturday, when the whole water issue was happening, the next was when i discovered this poor monkey, whom after populat vote has been named "chunky." 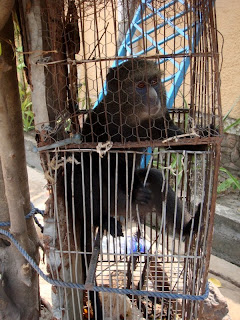 chunky is a young putty nosed monkey whose parents were presumably murdered for meat and rendered an orphan and then sold in a market. the brainless, soulless, savage owners of the Luntu Apartment Flats Hotel thought chunky would make an amusing pet and entertain their guests. they quikcly realized that chunky was indeed a wild animal more than a perfectly domesticated pet, and that chunky might possibly bite and misbehave and scare guests and so they decided to lock chunky up in tiny iron cage to spend the rest of his days sitting on a metal bar amidst his own feces, and barely given scraps to eat or water to drink.
the cage is so small he can't stand or stretch, hasn't felt the ground or walked on his own two feet in months. these people think bread is a staple of a monkey's diet. even worse, his cage is right next to a noisy construction site and lit up at night by streetlights so the poor guy barely can't even sleep. chunky never gets a break.
i've started sharing my trader joe's trailmix with chunky - it's perfect because i found out he only eats the craisins, which i don't like, and he hates everything else so i don't feel bad about picking out the almonds and cashews. he makes bird noises when i feed him. i gave him water from a bottle which he slurped up with his little tongue. i hardly see how he can bite given that his teeth are but millimeters long.
i have repeatedly threatened the hotel owners that it's barbaric, we will call the authorities, no longer stay at this hotel and we are constantly harassing the staff as to why they let this go on and we have repeatedly offered to take it away (where to? what do you do with a monkey, it's like a child!)...yet we are always met with the saddest moment which is when they laugh. silly lady, it's just a monkey.
they think it's funny.
ok, the kite birds with clipped wings are one thing but this monkey is a totally different level. i can hardly understand how keeping this monkey justifies losing $360 a day of my organizations's business but if that's their principle, then i am allowed mine and so be it. so whoever comes across this blog, please, don't stay one single night at the Hotel Luntu Flats in Gombe/Kintambo Magasin as long as that monkey is there. (other choices are African Dreams, Hotel La Residence 165, El Castillo). 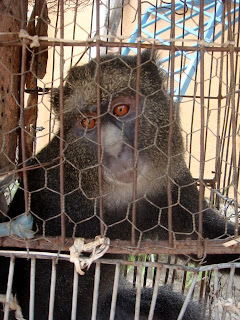 there are times when you wonder whether humans can actually stop being human - whatever quality "human" describes? it's not a matter of different culture anymore. i truly believe that the people who publicly torture this innocent animal every day will be punished by whatever god or karma they believe in.
Posted by lefty at 6:59 AM

Labels: kinshasa round 3, save the world

Awful. But of course, the hotel owners' attitude is precisely what enabled the Destruction of the European Jews, the Rwanda genocide, the Armenian genocide, and umpteen other inhuman events.