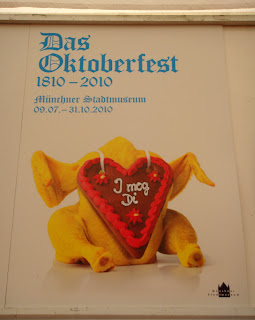 ﻿ most berliners and north germans cringed and mocked me when i said i was going to oktoberfest. "you'll see so many drunk tourists." well, i did see lots of drunk tourists. i was a drunk tourist. and it was fantastic!
i was lucky enough to secure a last minute spot in an oktoberfest frisbee beach tournament outside munich, which meant for 60 Euros i would have a place to stay for 2 nights, food, and 140 other people to attend oktoberfest with - in a reserved box in hofbrau tent. oh, and i'd get to play a lot of beach frisbee.

i took a night train to munich the day before the tourney and met some mates from berlin on the bus to the frisbee beach. it was a hat tournament so you get automatically put on a team. every team was named after a classic oktoberfest ride. we were team schichtl, which only one person on our team (the german girl) could pronounce so eventually we became known as "shitshow." greatest show on earth!
it took a little while for us random group of dane, australian, canadian, slovenian, portuguese to get our groove on, but even losing in shitshow style was fun. that night there was a dinner and party in this weird indoor beach greenhouse, and i set up my tent near a lovely lagoon. i invited people to my lagoon. but beware of pirates!
there were no games on saturday. we were woken up by annoying salsa music emanating from the bar, and served white sausages, pretzel and beer and sent on our way to the s-bahn to the fest.
﻿﻿we had a few hours to kill before our beer tent reservation and i begged my group to go to the infamous teufelsrad, a 100 year old ride that i so badly wanted to see.﻿
﻿it's a spinning floor thing and they try to kick people off with a big medicine ball, ropes, whatever. there is lots of funny commentary, and you don't win anything but pride for being the last person. it took me a few tries to get the hang of it, and i learned how to kick other people off and then square off against the medicine ball and the rope wranglers. i had a few beers so my senses were a little dulled, but i did make it to the top four once. i had the spinnies for the next 2 hours. my arms are still sore. 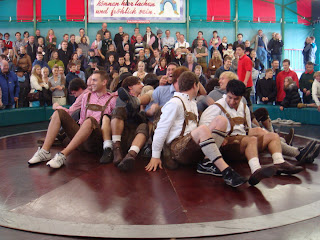 the teufelsrad was the best 3 euros you could ever spend at oktoberfest, i could have stayed there all day.
even after the girl with the thong was last one standing, the bunch of german guys in lederhosen who were with me insisting on going to the traditional oktoberfest, where they were re-enacting and showing the oktoberfest activities from 200 years ago. someone had told us there was this famous horse race, but we were 2 hours late and all we saw was an 8 year old riding a miniature pony.
i was quickly over ye olde boring oktoberfest, though i ate a quark pastry bag thing that was tasty. we did drink a really old beer recipe and then go through the moving tunnel thing and the house of mirrors. i found it odd that the calypso ride was in between the oktoberfest museum and the traditional chicken hut. the calypso was meant to be a children's ride, but i'm pretty sure you can see boobies on those girls.
﻿
﻿so we went back to the teufelsrad to see 2 kids trying to box on the rotating floor, and i spun around a few more times to really shake up the olde beer in my stomach.
we walked towards te beer tent, but not before stopping at a couple of stands. the handsome gentleman i was with did the hammer thingie and won me got a whistle. 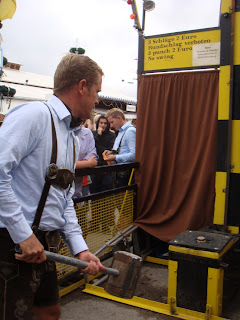 as we approached the beer tent area things changed from old timey fun to seriously weird.
there was suddenly trash, wobbly people, puke, a grown man who had shat in his pants. one guy had puke on his face and tried to get into the tent. the bouncer turned him away. he wiped off his face with his hands and then tried again. rejected.
near the tent was this hill that looked like the aftermath of a beer war. people were moaning, lying there in the mud, puking, peeing, shitting, having sex. like nothing i've ever seen before.
i averted my eyes and entered the special line at the back of the tent. here, in this temporary tent, thousands upon thousands of people drinking out of huge steins with a loud oompa band on a platform. the handsome german pointed to the angel hanging from the ceiling: "welcome to heaven." people were tossing clothing up to the angel, and there was a large pair of panties hanging from the nose.
﻿we sat on these long benches and tables and fraus came by frequently with arms full of glassware to refill. utter chaos. everyone once in a while the band would play a short song which signaled everyone to stand on their benches and clink glasses. my arms were pretty tired from frisbee, it often took me two hands. we had a lot of big guys on our bench and it was sagging dangerously. i figure this is germany, they make good benches, at which point ours snaps and collapses on itself and 6 of us all land in a pile of humans covered in beer, our glasses sadly empty.

they give us a new bench, new beers and off we go.
i ate some chicken, a really huge pretzel, and according to the colored-in beers on my tournament t-shirt, i drank 3 steins, but somehow spent 80 euros. we sang to queen and led zeppelin and played kazoos...i don't know. i thankfully ended not on the hill of puke, and instead in a dance club with some french guys but then left without saying goodbye and took some s-bahn's, a taxi, back to my tropical beach where i caught up with my team and we all recounted the evening shenanegans.
believe it or not, i wasn't too hung over to play more frisbee the next day, this is quality beer people. and after the weissbeer and sausage breakfast, we managed to actually win a few games. i caught my train and was home in berlin by midnight.
you still think oktoberfest is awaste of time? no way, i'll be there next year! in a dirndl!
more pictures and movies here.﻿﻿
Posted by lefty at 4:34 PM