the future of DRC!

these days i'm helping out at the ministry of environment in kinshasa. there's a new office and we are essentially setting up the future park system of DRC and these are the headquarters!

The place is a big ole villa with a busted up schoolbus in the courtyard and a boat up on pilons.
There’s a giant ditch out front you have to leap over to get in and I found the ditch is juuust a bit wide for one of my skirts.


Across the street is some foreign ministry where pimping black cadillacs (from 1982) show up with kids running after it. A bunch of guys in leopard print will get out – chiefs from the other provinces. One day they caught me staring at them, I was contemplating the leopard print caps and rattan pants and they blew kisses and waved. So cute. I could have been part of their harem.
normally, there are employees in our building, but i heard the bus that picks them up (is probably the one out front) and brings them here apparently broke down and no bus means no employees come anymore. there are a few stragglers, people who sit in empty offices at empty desks and take naps. whenever we pass the door that says “Information Technology” and has 3 people in it (only working a/c) even though there are no computers or servers or phones we keep telling ourselves, the future of the park system of DRC!
sometimes i'll walk around and say hi to the folks around and it makes everyone so happy. They look up from their bible or empty hands and say heeeeeyyy! Madaaaaame! My favorite was how the papa who cleans the place apologized to me for 20 minutes that he has been out for the past 3 days because he was at the other office getting a new broom, check out his broom. It’s going to clean now.


The copy machine is just outside. Next to the ministry, a bunch of guys on the dirt with a table and a big old photocopier on it. There’s a sign advertising "crystal clear"black and white copies. They plug in to the guy next to them who has a grid of outlets screwed to a board. And this board has a long extension cord that plugs in somewhere, probably the foreign ministry. 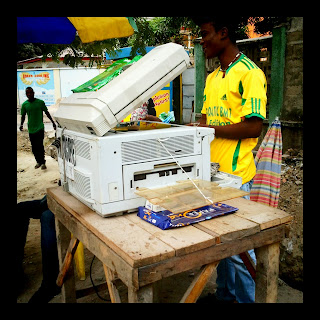 The street is rather nice to walk around, lots of impulse shopping (eggs from a box on my head? jeans? cds?) but the corner at the boulevard is treacherous, with aggressively begging kids. Even if you give them money they end up fighting over it and getting all mad, it’s awful.
So it’s apparently a phenomenon now, the street kid, or shege. They’re not even orphans, it’s like a woman will have too many kids, or kids with a new boyfriend and they end up accusing the kids of their previous relationship of sorcery, which i guess is the most socially acceptable grounds to kick them out of the house and they end up as one of the 30-40,000 street kids who hang around intersections and reach into your car. The worst is that a lot of these kids are no longer kids, when sheges grow up they don't go off to college and marry, they become angry, bitter, very violent teenagers who don’t think twice about punching you in the face in broad daylight. happens almost every day, so far, thankfully, to everyone but me. And that’s the reality of Kinshasa.