..after the bombs. lunch!

so after a rude awakening by nearby explosions, we sat inside for a while upon the recommendation of our respective embassies we watched the news, drank coffee and played a quick game of carcassone, now becoming an obsession in the apartment.

once it was declared safe, we decided to reward ourselves with the fabulous 34$ buffet at the cercle francais. it's a total ripoff, but good for the sheet variety. and it's the only place you can safely eat salad. there are plates of fried anchovies, pasta (a rare luxury), nicely cooked plantains, roasted vegetables, big cold bottles of Tembo...finally, some vegetables. especially after our dangerous escapade into the world of meat on tuesday -guitly as charged, it was my idea to order the 100$ 2kg meat platter, just for fun. it was mostly bloodsausage, which the germans in my group didn't mind at all..mmm lecker! but if i can offer a word of advice to the kinshasa tourist, you don't want to know what's inide congolese blood sausage.
anyway, at the end of the buffet was something for the cooker jules within us all, pate en croute! or, this version, a sortof giant goat sausage inside a loaf of whitebread, served with its mayonnaisey sauce. it doesn't have the adornments you might see on kitschnclassics﻿, but hey, this is kinshasa, gotta make do with what you got. 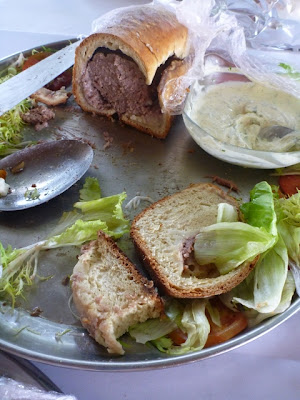 ﻿﻿and over here is a barbeque'd suckling pig, teeth and all.