the first time i told my berlin aquaintances i was going to frankfurt, i was bombarded with a string of expletives interspersed with "boring" "ugly" and "never go there."
on the other hand, those that live in frankfurt kinda like it. i can't really blame them, it's one of these places that isn't paris, but makes the best of what it has. there's an ok river, the Main, on which Frankfurt provides a kebab boat. where you have little german tudor houses, frankfurt gives you ample apple wine and meat. and where you have potatoes and eggs, you have GREEN SAUCE. 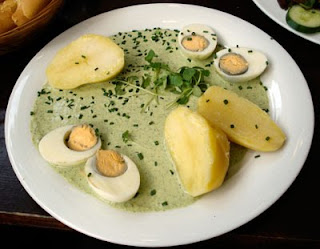 the first time i saw green sauce it was in a cafeteria and there was a few gallons of it behind a sneeze guard. i was skeptical and passed it up for the sour cream-like white cream. boy do i regret not putting my face in it like i was bobbing for apples.
it has a bunch of herbs and stuff, i don't know, but a very legit frankfurter made some with his mom's recipe and brought it to my house for dinner last weekend. when no one was looking i dipped my finger in it. i also put pertzels in it, pita chips, eggs, bread, risotto, anything edible. probably could have put wet newspaper in it and loved it. it all tastes good because green sauce is SO good.
at the end of the very long night of wine drinking we were cleaning up and i so cleverly dumped the remaining green sauce contents into my tupperware and slid it into the fridge for later. unfortunately, it was cheap german supermarket tupperware and when it slid of the shelf it exploded its contents on the floor.
oh no! the green sauce!!
i will not tell you if i licked it up off the floor.
make fun of me if you will, for liking expensive, boring, lame-o frankfurt, but i don't care what you say because as long as there is green sauce, i LOVE frankfurt.
Posted by lefty at 5:16 PM